I rarely get the fluffies professionally groomed.

I just don’t trust anyone, so I do it myself.

I constantly see horror stories about people taking their dog to the groomer’s and the dog coming back in poor condition. I haven’t been willing to risk that.

After talking to pretty much every groomer in the area, I finally found one that I felt would be a good fit. We talked at length about Mauja and Atka and what I wanted in a grooming session. When grooming time finally came, I seriously considered cancelling. I had a horrible knot in my stomach about letting the fluffies in someone else’s care.

After a serious pep talk from Nick, I took them to the groomer’s. They made me feel absolutely horrible by whining and scratching at the door when I left. I didn’t think it would be this difficult!

I was a nervous wreck until the groomer called me to let me know the pups were done. Nick would probably say that I wasn’t the most pleasant one all evening. I just couldn’t stop worrying!

When we arrived to pick them up, I couldn’t have been more pleased. Not only did they look immaculate, but they were out in the main room with all the workers. I expected them to be in a crate in the back when I got there, but they were both just relaxing on the floor like they were the grooming welcoming committee. I breathed a huge sigh of relief.

Since it was such a long day, I wanted to give them a special dinner.

The other day, we saw a post from our pal Oz the Terrier about a limited edition Merrick recipe, Forever Home. Forever Home is a canned food that benefits homeless pets. With every purchase of Forever Home, Merrick will donate a meal to PAWS Chicago. 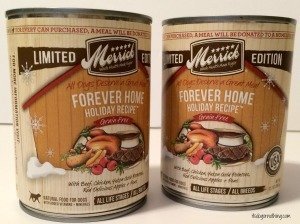 We picked up two cans of Forever Home, which will lead to two meals being donated by Merrick to PAWS Chicago.

The fluffies were thrilled with their special dinner. They gobbled up their meals and then passed out for the night.

I don’t think I’ll ever be completely comfortable leaving the fluffies, but this groomer has settled my nerves a bit.

Does your dog visit the groomer? Would you try the Forever Home recipe?

We’re joining the Thoughtless Thursday Blog Hop Hosted by Ruckus the Eskie and Love is Being Owned by a Husky! 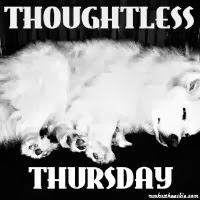