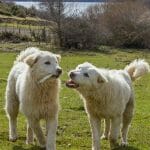 Grooming a double coated dog, such as a Great Pyrenees, can be quite the task. But, fear not! It’s not as difficult as it may seem.

I can’t even keep track of how many times I have heard someone ask me, “why don’t you just shave them?”. Shaving a dog with a double coat is rarely ever a good idea. The only time shaving should be done is when it’s absolutely necessary. I can think of two such times:

Few people realize that a dog’s double coat actually helps them in the winter and summer. Have you ever heard someone say, “my dog is blowing his coat”? For most double coated breeds, this happens twice a year. Once to go from summer to winter and again to go from winter to summer. Currently, Mauja is blowing her winter coat and getting in her summer coat. This means extra shedding! Atka still has mostly puppy coat, so he is slowly shedding that for his beautiful adult fur.

The best decision I ever made when it comes to grooming my pyrs was buying a grooming table. Seriously. Do it. You will thank yourself. I had a hard time justifying spending $100 on a simple table with an arm. I kept trying to think of ways my husband and I could build one, but I worried it wouldn’t be sturdy enough. So, after reading MANY reviews, I finally purchased a table.

The table came with a lead that attaches to the arm and goes around the neck. I wasn’t convinced Mauja and Atka would stand on the table, so I bought a double lead. The lead that is wrapped around the arm can be put around the dog’s waist so she can’t sit down. I only needed this once until they understood the routine.

Today, I was only doing a simple brush and nail trim. They weren’t in need of a full bath, blow dry, brush, nails, ears, and teeth, so I will just explain what I did.

My absolutely favorite tool for brushing out the undercoat is the Oster Undercoat Grooming Rake. I’ve used so many different undercoat rakes, including the FURminator, over the past several years and this is by far my favorite. Don’t get me wrong, I love the FURminator, just not for my pyrs.

To make it easy, I’ll go step by step as to how I groom my double coated dogs. Before beginning, you must figure out how you are going to get your dog on the grooming table. Mine will not jump up and I certainly can’t pick them up

have taught mine “paws up”. I will say “paws up” and pat the area of the table I want them to put their front paws. Then it’s just a matter of hoisting their hind end up there. If your dog isn’t used to a grooming table, treat treat treat! You want them to like grooming time.

Eventually, I’ll invest in some doggie stairs. For now, this will do.

Start with a rake

Raking out the undercoat is by far the longest step. I brush the floofs two to three times per week, so this only takes me about 15 minutes. If they’re blowing their coat, it will take a bit longer.

This grooming rake works like a charm. Have you ever felt a double coated dog and thought their fur felt lumpy? That’s the undercoat getting matted together under their top coat. Brush until your pup feels nice and smooth. 🙂

A slicker brush is great for removing any dead or loose outer coat, and work out their pantaloons. The fur is thicker and longer back there so the slicker brush will really help. I’m also a huge fan of the Groom Genie for keeping the pantaloons mat free.

I like to use the comb to work through the fur on the backs of their legs. This is a place that can get matted easily if not worked the entire way through. I also use the comb over the body to get out any fur that my grooming rake missed.

Spray The Stuff on mats and tangles

The Stuff is magic–not even exaggerating. When we moved, I slacked a bit in grooming. She got these horrible mats in her pantaloons–they were huge. I couldn’t believe they had gotten so big so quickly

didn’t want to cut all the fur off her back legs so I did some research and came across The Stuff. Spray on the mats and tangled areas and move on to the next step.

Once The Stuff has had a little time to sit, I go in with this de-matting comb. I have never had to cut out a mat since using these two products. The two break the mat down so it can easily be brushed out. Easy peasy–you can thank me later 😉

Related: Getting Holiday-Ready with RELIQ

I like to use a pin brush around the face since the fur is thinner there, but I also use it to create a nice finish. I’ll first use the pin brush side to glide through any tangles I may have missed. Then I use the bristle side to make them look sleek and shiny.

I will do a future post on how to properly cut nails. I like to use clippers with a safety guard on the back, so I don’t slip or cut too far, or a dremel. (Always keep styptic powder on hand in case you accidentally nick the quick.)

Oh, I forgot to mention… there will be a tad bit of clean up…