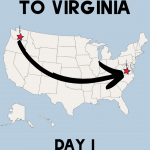 *Note: I’m writing these at the end of each day, so I’m pretty tired when I do. I apologize if I rant or things read strangely 🙂

On day one, we traveled from our house south of Seattle to Boise, ID. With four dogs and a cat, we’re taking our time getting across the country. This gives us time for long midday walk breaks and early evenings to get them out moving again.

We took the dogs on a quick walk in the morning and then hit the road. We have an SUV and a car, so we had to decide how we were going to transport the animals.

It made the most sense for Kiska and Kaani to ride in my car—partially because they’re the smallest, but also because Kaani is closest with Kiska. We figured that pairing would be less likely to have issues.

Plus, Mauja and Atka wouldn’t have to deal with puppy shenanigans in the SUV and could relax. With the extra room, we decided it would also be the best place for Indie.

About 30 minutes into the drive I got a phone call from Nick.

“Indie got out of her crate.”

Awesome. At first, we thought she chewed her way through. But we stopped to check, and the little nugget managed to work the zippers!

It ended up being the easiest to leave Indie out of her carrier. She was much calmer and happy being Nick’s co-pilot, relaxing quietly on the passenger seat.

The drive went smoothly, and we arrived at the hotel fairly early. This meant we had more time to walk around. And that’s when things started to get interesting.

The good, the bad, and the frustrating

When we arrived at the hotel, we decided to take the dogs for a quick walk. Nick, Mauja, and Atka wandered off, and I was a bit behind with Kiska and Kaani.

All of a sudden, I saw two kids sprinting toward us squealing about the dogs.

I immediately put Kaani in a sit behind be and told the kids that he was nervous around new people, so they couldn’t pet them. It took a few times, but eventually, they nodded and walked a few feet away—where I saw their mom.

The kids then ducked behind the cars to stare at the dogs while calling them and making noises. I kept Kaani close and we continued to walk away.

I was extremely proud of his behavior here. While he was definitely upset, he stayed composed and mostly focused on me. I was frustrated that the mom never stepped in and told her kids to walk away.

Later that evening, a man really wanted to pet the dogs (I’ve noticed that Kaani is best with kids, followed by women, and worst with men). He walked toward all of us, and Kaani immediately perked up and started watching the guy as he came toward us.

He redirected away from the man very well, and we were able to continue our walk.

The not so good

The “not so good” part came when we were relaxing in the hotel (and it was totally my fault).

Kaani has to be crated in the evening because that’s when he tends to get “grumpy.” He was in his crate and kept yipping at me. This is something he does frequently, so I wasn’t too concerned.

At this moment, Kaani stood up in his crate and started peeing. Welp, that’s what I get for not listening to him!

Nick ran him outside while I cleaned up his crate. The amount he pees versus the amount he drinks just doesn’t add up to me— but I had the vet run tests on him, and everything came back normal.

If you’ve had a dog that pees way more than they drink, let me know. It could be normal for him, but it could also be something I’m not thinking of.

During that walk, we ended up passing a large rock (probably about three feet long and two feet tall). The second Kaani noticed the rock, he started barking. Then he flattened to the ground—tail tucked—trying to get closer and check it out.

We backed away and let Mauja and Atka walk up to it to help him realize it was no big deal. Kaani slowly crept toward the rock, and after a few seconds, decided it was completely okay.

It seems little, but that’s a huge step for him.

After a late night walk, everyone settled in for the evening and slept the night away. We definitely needed a good nights sleep to prep for day two!

Learn about the rest of our trip