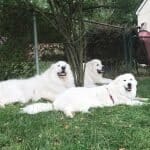 It’s hard to believe Tikaani has been with us for four months!

I really wish I knew what happened earlier in his life, but we’re just going to push forward regardless. He’s living the good life and learning a lot.

Once he trusts you, he’s extremely eager to please—he always wants to make his people happy.

Check out this quick video of Tikaani’s progress over the first few days with us!

Things were a little rocky between all four dogs at first, but that was to be expected with all of the changes Kaani was going through. Although Kaani was a bit nervous, the first intros went great. Mauja, Atka, and Kiska were pretty respectful with his space to not freak him out too much.

Kiska and Kaani bonded almost instantly. I think a lot of it is because they’re so close in age. They seem to have a similar relationship to Mauja and Atka, who are also just a year apart.

Everyone was able to be outside together without an issue. We struggled when we brought them inside. Kaani would lunge at Mauja in the evening, causing Kiska to jump in as well. Then we had three dogs going at it.

So, we did a version of crate and rotate. Two inside, two outside. It definitely helped everyone relax. After a few weeks, I was able to have all four inside without an issue during the day. Dinner time seemed to be the tipping point. Kaani would get tired and snippy.

Thankfully, he absolutely loves his crate, so he was happy to go hang out in the evenings.

Because of this, I was definitely worried about all the hotel stays during our move from WA to VA, and our next home being an 800 sq foot apartment.

They continued to improve over the weeks. We had a few hiccups, but overall, things were great.

Once we moved into the apartment, everyone got a little feisty again (definitely can’t blame them!). There were a few scuffles, but nothing as bad as it used to be.

It only took a few weeks for everyone to settle in—I couldn’t tell you the last time we had a fight here. Everyone is being very respectful of space, and they can even enjoy bully sticks within a few feet of each other without any issues.

Related: How to Muzzle Train Your Dog

When I first got Kaani, he would bark and lunge at every stranger he saw. It seemed he wasn’t the dog to actually bite based on my experiences with him. He’d grab your arm, but never clench down. He wanted you to know he meant business.

Can’t say I blame the guy.

I’d want them to know I’m not messing around if someone smacked me with a baseball bat (or something similar since we don’t know exactly what happened).

We’ve been working on a few things to help with this: the check-in, confidence, leave it, and general comfort around strangers.

The check-in and leave it are a very similar concept—although one is prompted and the other isn’t.

Kaani is learning the check-in, so he can recognize his own level of discomfort. He looks to me if he sees another person and is feeling uncomfortable. Then he gets all the praise and treats for being able to make that decision on his own.

But sometimes, it’s too much and he can’t think to check-in. That’s where leave it is important.

If Kaani starts to show signs of stress and forgets to look to me, I instruct to leave it. We’re still perfecting this skill, but he’s doing really well. I teach my dogs that when they leave it, they should look up to me (rather than just ignore the item/person).

Kaani looks to me and the treats start flowing.

He’s made a lot of progress, and he can now walk calmly past people 90% of the time. We’ve had strangers within 10 feet of us, and he handled it extremely well.

We still have a lot of work to do, but I’m extremely optimistic.

Tikaani is slowly warming up to people he sees more frequently. In fact, just a few weeks ago, my best friend was able to watch the dogs for the evening so we could enjoy a soccer game.

Not only did Kaani want to take treats from her, but he adored her affection! I couldn’t get over the videos of him running up to her for attention.

I thought my heart was going to burst.

He’s also doing really well with my mom and sister. He doesn’t want to be pet by them, but he’ll gladly take treats! String cheese is the key to becoming his friend.

So now, Kaani is completely comfortable with myself and Nick. He’s 98% comfortable with my bestest, Jess. He can handle being around my mom and sister for a bit until he gets overstimulated. I think with another visit or two, he’ll be loving them as well.

He’s been making great progress with my dad, so we’re going to keep working on building that relationship.

Every day, Tikaani learns that the world is just a little less scary, and it makes my heart happy.