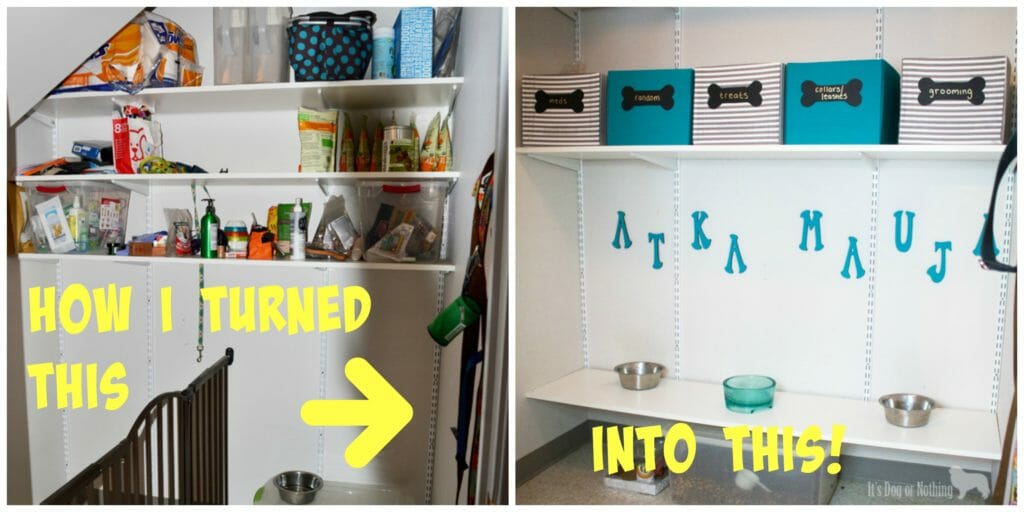 How To Create a Giant Breed Dog Nook

I apologize in advance for the less than stellar picture quality. This room is in pretty much the darkest area of the house and no matter what I did, I could not get good pictures!

Before Atka came home with us, I wanted to set up a “feeding area” for the dogs. While Mauja had never shown signs of food aggression, I didn’t want to take a chance with a new puppy. I did some experimenting with crates and separate areas around the house but couldn’t find an area I liked. Plus, I didn’t want things just sitting around. I wanted a dedicated dog nook.

Eventually, I decided that we really didn’t need our Harry Potter closet (the closet, or cupboard, under the stairs) for storage. I emptied it out, took out a few shelves, and turned it into a feeding area. We put up a baby gate so each dog would have their own side and set their food bowls facing opposite directions.

It worked perfectly. That is… until I decided it looked like a complete mess. 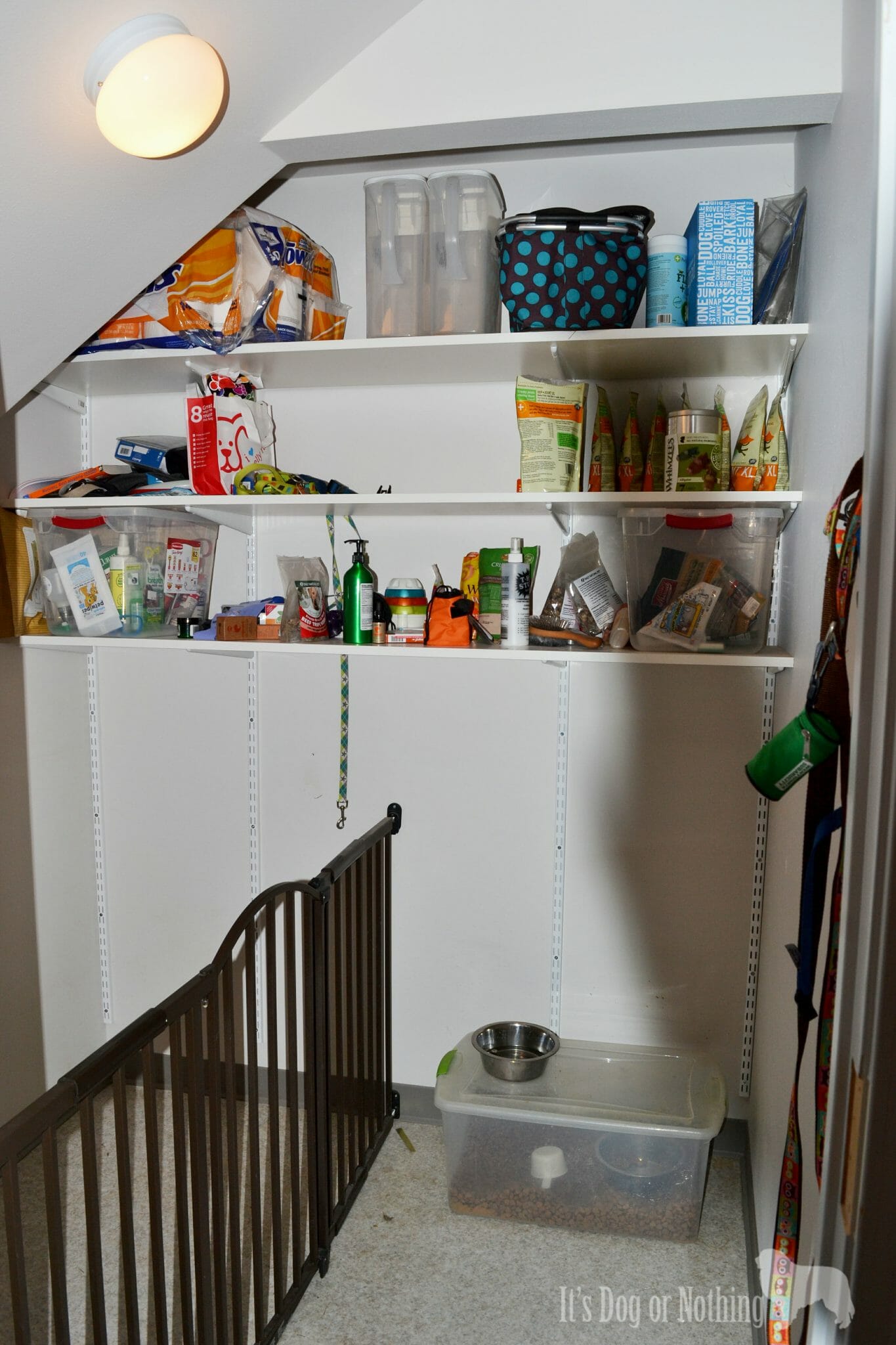 One year ago (yes, one year ago), I was inspired by some pictures on Pinterest showing super cute dog areas.

So, I decided to get creative and went to work.

For us, we had a closet under the stairs (I call it our Harry Potter closet). Maybe you have a small room, or even just a corner of a room that you want to dedicate to your dog. Just find a place that makes sense for you!

Step 2: Clean Out the Area

Even after initially turning it into a dog area, we had some random items in the closet. I moved some extraneous items to make it more of a dedicated area for Mauja and Atka. Since we had absolutely zero issues with them sharing a feeding space, I removed the baby gate to make the area seem bigger and more open.

I really hated the clutter of the room. Since it didn’t have a door on it, there was no way to hide everything. I went looking for some cute storage bins, but they were a bit expensive and I couldn’t find any I liked. For some reason, I decided I was talented enough to create my own storage bins. After failing miserably and becoming extremely frustrated, I followed this tutorial from Namely Original. 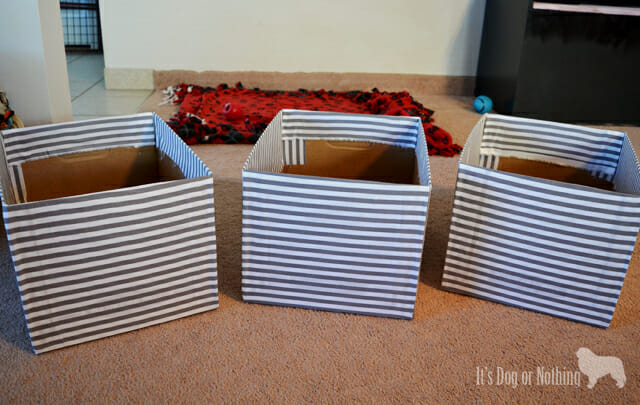 I used some boxes we had around the house and skipped putting the fabric on the inside. I didn’t see the point since no one would really see the inside. Plus, I figured things would end up spilling or crumbling inside making it dirty anyway.

After I covered the box, I cut out some paper dog bones to use as labels. Print a template off the internet and trace! Easy peasy. I can’t even handle letter stencils (as I learned earlier this week), so if I can do it, you can do it 😉 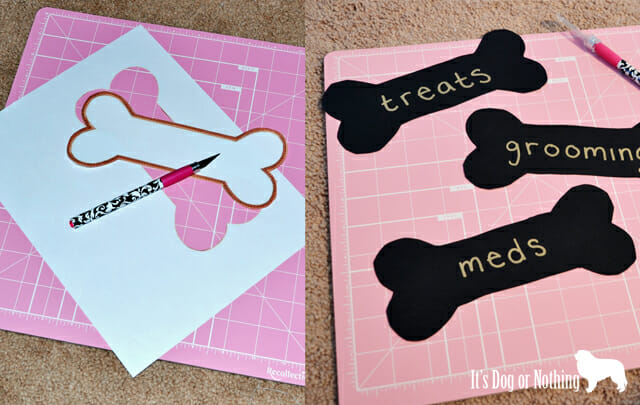 I had a lot of fun with this step! Although, I actually never finished everything I wanted to do. Perhaps once we’re in our new house, I’ll add the final touches to really complete their dog nook. There were three main things I did to decorate Mauja and Atka’s space:

Add their names to the wall. I went to Michaels, picked out some wooden letters, and painted them. Then I hung them on the wall with some adhesive strips (no nails needed – phew!) over their eating spots. I didn’t realize it until much later, but this made it super easy for anyone to feed Mauja and Atka. They always sit in front of their names, so no one will accidentally feed them the wrong amount! 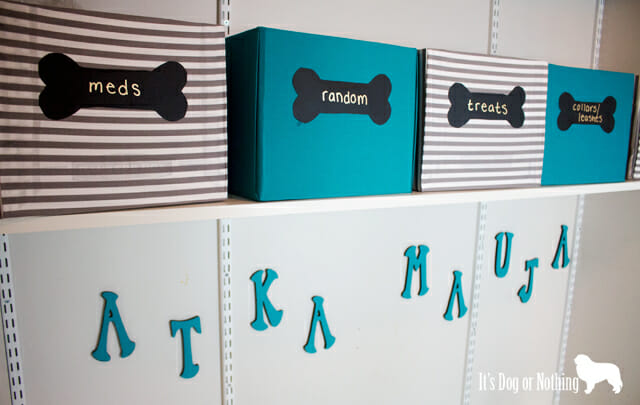 Hang some cute pictures. I really, really like canvas prints, but have you ever purchased them? Holy fluffy, they’re expensive! I found a kind of cheater DIY version that is super easy. Plus, they turned out so cute! Check out this tutorial from Designer Trapped in a Lawyer’s Body. The only thing I did differently was to paint the edges of the canvas black before adding the photo (which she points out at the end). I tried doing it in the recommended order and completely messed up my picture 😉 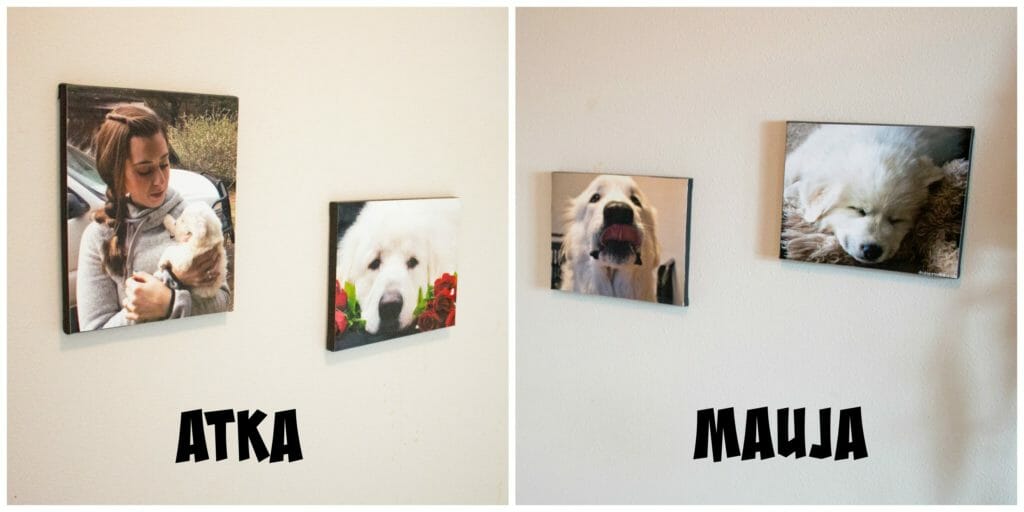 Get hooks to hang leashes. I had totally planned to DIY this part too, but after everything else I was DIY’d out. Eventually, I’ll go back and update them. I found some dog-themed hooks at Bed, Bath, and Beyond and loved them. For now, I think they work. 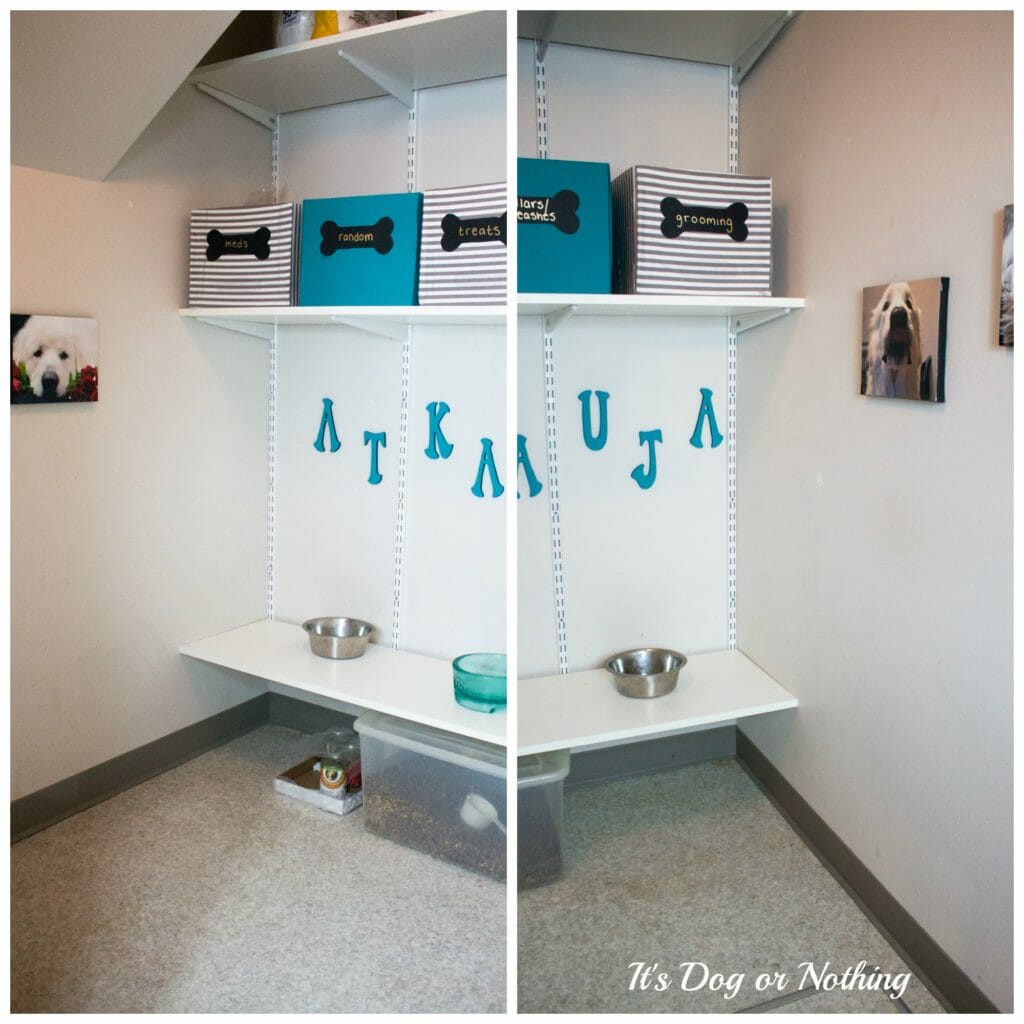 While there are still several things I want to add, I wanted to share this project with you before we move next week and it disappears! Some personalized PrideBites placemats are one of the first things I think I’ll add next. 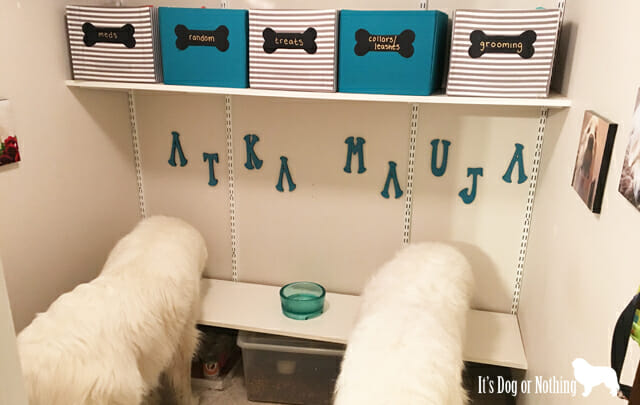 Have you created a special area for your dog? What else do you think I should add to their dog nook? 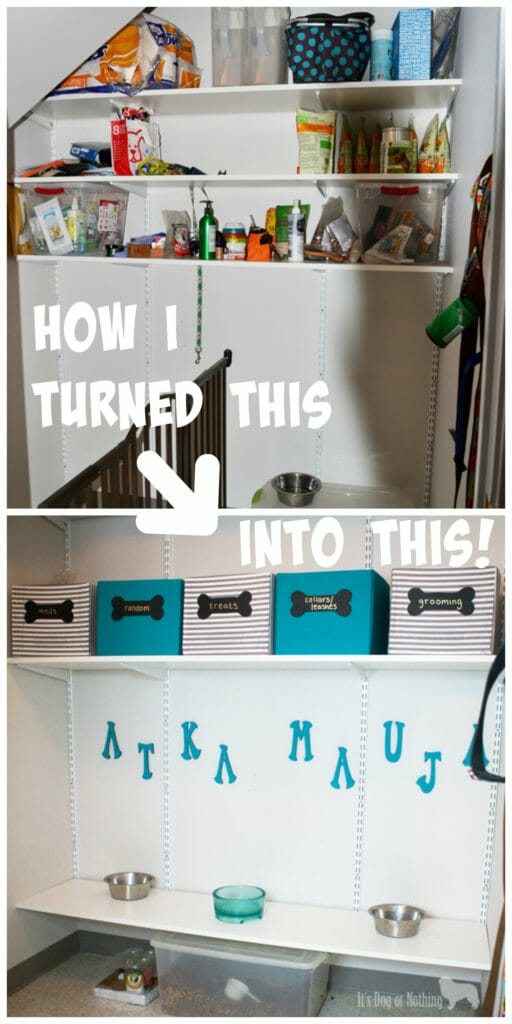