Phew, these past couple days have been crazy. On Tuesday, Balto got neutered. We got the house all ready and were so excited for him to come home with us that evening. When I called to see what time I could pick him up, I learned that they wanted to monitor him overnight. We were devastated, but knew it was in Balto’s best interest to stay overnight.

Wednesday couldn’t go by quickly enough. I was told I could pick him up any time after two. Knowing I had a 30 minute drive, I got ready to head out of the door at 1:30. Little did I know I would have a detour on my way to get Balto from the vet. 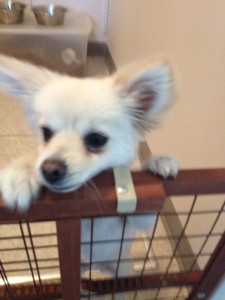 As I went out back to bring my dogs inside, I heard yapping outside our fence and my dogs were jumping around like crazy. I walked out of our front door and this little dog came running up to me. It was obvious she was loved and cared for; she was freshly groomed and had on a pretty pink collar. Unfortunately, she didn’t have any tags. So, off to the shelter we went to check for a chip.

Hooray! She has a chip! I called the owner and (how embarrassing) the dog belonged to the people across the street from us. In my defense, I had only seen the dog from afar and she hadn’t been shaved last time I saw her. She looked like a completely different dog! After returning the dog to her owner, I was off to the vet to pick up Balto. Finally!

When the vet brought Balto out to me, he was his normal chipper self. Definitely bothered by the stitches, but in good spirits. Poor guy had to wear the cone of shame because he wouldn’t let his incision site alone. I couldn’t bare to let him wear the horrible plastic cone for the next several days, so off to Petco we went. We bought a soft collar and some special toys and treats for his lazy recuperation time. I felt so bad for him, I had to spoil him 😉 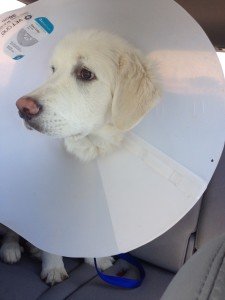 Mauja and Atka had already met Balto, so once we got home we went on a short walk to get them acquainted before going inside. Everything had to be very minimal with Balto because he was still needing a lot of recovery. Luckily, the meet and greet process couldn’t have been easier. We gave them a few minutes of off leash time in the yard before taking Balto inside to relax. 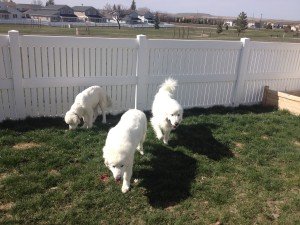 We relaxed the whole evening so Balto could recover and Mauja and Atka could get used to another dog in the home. At bed time, we planned to keep Balto downstairs because that’s where the bigger and comfier crate is sitting. We have a crate in our bedroom, but it’s much smaller. I just couldn’t imagine leaving Balto downstairs by himself, so I slept on the couch next to him. That’s where I’ll be sleeping tonight too!

This morning I got up early to get Balto out to stretch his legs before I had to work for a few hours. We have kept him separate from Mauja and Atka because if we let them together, they all just want to play. Not good for fresh stitches. Thankfully, they are handling being separated very well.

When it came time for breakfast, Balto wouldn’t eat. I tried hand feeding him, but he still only ate a few bites. Poor guy is hurting and stressed. He makes my heart hurt 🙁

Later was puppy bath time! He was filthy and smelly. I can’t imagine he’s been bathed often (or at all) based on his coat, but he was amazing! He just stood in the tub, looking pathetic of course, while I bathed him. Once we got him dry, I brushed him for a bit. Again, he did so well! Brushing definitely isn’t something he’s had done frequently. His hind end is complete mats. I’m hoping my usual mat treatment will work on him.

Tomorrow we leave for Wisconsin! Nick and I really wish we were able to keep Balto. I sat last night cuddling with him and crying just knowing I was going to have to send him to yet another home. Experiences like this make my passion of rescuing even stronger. He has the absolute sweetest disposition and I know he would fit in well with our family. Unfortunately, rules are rules and we’ve known from the start we were just getting him out of the shelter and to a rescue that would be able to find the pyrfect family for him. Some family is going to be very lucky to have him. I can’t wait to see him in his furever home.

Wish us luck on our 18 hour road trip! I might have to spend the trip sitting in the back seat cuddling with Balto 😉