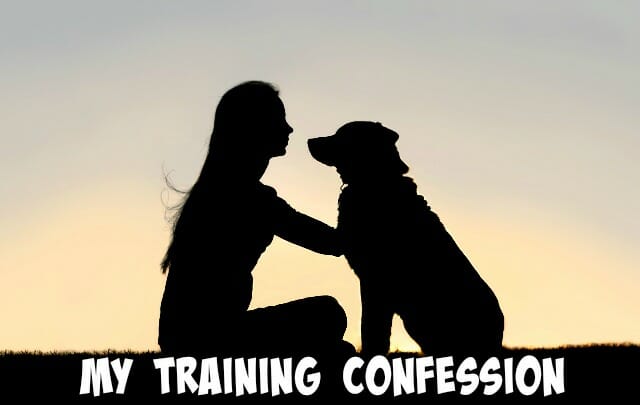 My training confession –  I ignore a lot of professional trainers.

Atka and I have attended a few training events over the last year. All of these events were very basic for Atka, but it got him working in a new environment with different stimulation – something his adolescent brain desperately needs!

At one point, the trainer had all the dogs walking in a large circle to practice loose leash walking. She called out for us to stop and I asked Atka for a sit. He sat, but after a few seconds, his butt slowly slid back until he was in a down.

The trainer noticed this and made a snarky remark about Atka being dominant and I needed to put him back in his place. She suggested doing this by yanking the leash upward to force him into a sit.

First of all, I don’t believe in forcing my dog into anything. Secondly, you really expect me to pull a 130 lb dog up when he absolutely does not want to be up? Good luck with that one. I’ll pass.

To be completely honest, I don’t care how he relaxes. I only care that he actually relaxes. Getting a Great Pyrenees to enjoy training is a task itself. I want him to have a good experience and if that means being in a down, I’m fine with that.

Thankfully, Atka and I have been working with a trainer recently who gets pyrs and more importantly, gets Atka. He’s not a puppet. I’m not going to make him do as I please all the time. He’s an independent boy with his own mind and he deserves to express that. As long as he’s behaving, he can relax however he wants.

So, tell me. What’s your training confession?

This post is part of the Positive Pet Training Blog Hop, hosted by Cascadian Nomads,Tenacious Little Terrier and Rubicon Days. This month’s theme is Training Confessions and the next hop begins on March 7th. The hop happens on the first Monday of every month, and is open for a full week – please join us in spreading the word about the rewards of positive training!