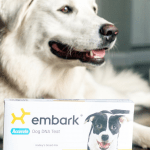 “What breed is she?”

This is a question I’ve been asked every day since this tiny, flea-ridden floof came into my life. I used to always very confidently respond, “She’s Pyrenees!” She looks the part and has double dew claws, so of course she’s a Great Pyrenees.

As Kiska grew, I started to wonder if she was mixed with something. At just over a year old, she’s a petite 75 pounds with a smooth and sleek coat.

Then, the comments changed from, “What breed is she?” to “There’s no way she’s full pyr. She HAS to be a mix!”

I started to get annoyed. Does it matter if she’s full pyr?

I just needed to satisfy my curiosity so I could answer the question confidently. Plus, I wanted to know more about her history. So, I started researching DNA test options.

Although a bit more expensive other options, I decided to order the Embark DNA test. Embark does more than test DNA. It tests for over 160 health conditions, which was very important for me since I don’t know Kiska’s history.

As soon as the test arrived, I eagerly ripped open the box and started reading the directions. I thought a cheek swab was going to be a bit of a pain, but the process they outlined is super simple.

I packed everything up and it was back in the mail the same day.

It was torture waiting for the results, and I was pretty much glued to my email just waiting for an update. Embark does a great job at keeping you in the loop throughout the process. I received updates when they got Kiska’s swab and as it went through the testing process.

Related: What’s Next for Kiska?

I squealed when I received the email that said the results were in, and spent the next 30 minutes reading the report. It was fascinating. I know Mauja and Atka are Pyrenees, but I’m going to test them as well to see what else I can learn.

I am so excited for the secret to be out! Enter below to guess what breed(s) do you think Kiska is? Is she a purebred Great Pyrenees? Is she a pyr mix? Is there actually any pyr in her at all?

I listed the most common breed guesses, but if you have another idea, enter it in the ‘other’ spot!

And since I’m so excited about this, let’s do a giveaway! How about a $50 Amazon gift card? If you guess the correct breed(s)