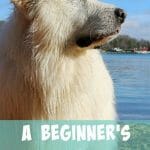 The Great Pyrenees, or Pyrenean Mountain Dog, is an ancient guardian breed that originates from the Pyrenees Mountains between France and Spain, although many believe they can be traced even further back to Siberia.

These dogs were bred to handle the dangerous task of guarding flocks of sheep and other livestock on the steep mountains from predators, all without human intervention.

Paintings and literature depict Great Pyrenees at least 2,000 years ago, however often under a different name. In 1675, the Great Pyrenees became a royal court dog due to their beauty, elegance, and majestic appearance by King Louis XIV.

The Great Pyrenees is a regal dog who is predominately white, although some have coloring on their bodies. Per the breed standard, Great Pyrenees may have badger marks in various shades gray, brown, and tan on their face and covering up to 1/3 of their body.

The double dew claws on the hind legs are also a classic breed characteristic.

Height at the withers is 27-32 inches for males and 25-29 inches for females. Weight should be proportionate to the size and structure of the dog. Typically, Great Pyrenees will range from 90-150 pounds at a healthy weight.

The Great Pyrenees is considered a medium boned breed (for reference, a Newfoundland is well boned and a Mastiff is heavy boned). This means that a 120-pound pyr could appear to be the same size as a 150-pound Newfoundland.

A Great Pyrenees should not be overly lumbering or light—the dog’s proportions are most important.

The Great Pyrenees is unlike most breeds as they were bred to think independently of humans in order to successfully do their job. This can often be interpreted as stubbornness as they typically do not strive to please people or listen to commands.

If your command occurs simultaneously with an instinctive drive, more than likely your pyr’s instinct will win. Sharing your life with a Great Pyrenees requires a deep understanding of this trait and the patience to be calm and gentle at all times.

Pyrs are slightly aloof with people, but always stun crowds with their calm, regal appearance. They are deeply devoted to their family and would risk their lives without a second thought.

Their strong, protective instincts can cause them to be territorial, but most often they will not do any harm. It is incredibly important to heavily socialize your pyr to all kinds of people from an early age.

Great Pyrenees are not attack dogs and generally won’t harm people, but they tend to intimidate with their size and deep bark. It is a pyr’s instinct to bark and it is usually impossible to train this breed not to bark. Bark collars and debarking are strongly advised against as a pyr will continue to bark regardless.

Barking is absolutely vital to the breed, so if you prefer a quiet dog this definitely isn’t the breed for you. Since barking is the way they protect their flock, expect them to bark a lot, especially at night.

Pyrs are nocturnal by nature and spend the night hours instinctively barking to deter any predators. Keeping pyrs inside at night and a good nighttime routine can help curb this barking.

The Great Pyrenees is known for roaming, so they require at least a 6’ fence (never an invisible fence) or a leash at all times. It is often said that an “off-leash pyr is a disapyr”. A Great Pyrenees will rarely have 100% recall, especially if you end up competing with instincts.

You cannot train a pyr to stay on your property because he feels his territory is as far as he can wander. Due to their independence and protective nature, they will often seek out threats to protect you and your family.

Pyrs do not have a sense of vulnerability and coupled with an exceptionally high pain tolerance, they will do whatever necessary to protect you. They also have extraordinary hearing and smell to sense potential threats long before you are even aware of them.

Although Great Pyrenees are large, protective dogs, they are extremely sensitive. Yelling, harsh tones, and aversive treatment will greatly harm your pyr.

They are also sensitive to the mood of their people and will stick close by to help you in your tough time. This breed must have companionship and affection or he will likely become destructive by digging up your yard or escaping your “escape-proof” fence.

Pyrs also typically do well with children and small animals. It is important to remember that pyrs do not fully mature until at least three years of age. Until then, you will have a clumsy puppy that can easily knock over a toddler accidentally.

While pyrs are more “tight-lipped” than most giant breeds, many still drool quite a bit. Drool and fur come for free with every Great Pyrenees!

Female pyrs tend to rule the show and be more strong-willed than the males, so it is often advised not to adopt two females together or a female with a strong-willed male. Of course, this varies per dog, so it is important to consider the individual personalities.

As previously mentioned, the Great Pyrenees is an extremely sensitive breed and is easily traumatized. Hitting, yelling, and other aversive methods will quickly cause your pyr to lose trust in you.

It’s a common misconception that pyrs cannot be trained. Great Pyrenees are exceptionally smart and need to be challenged. While they may show little interest in training and will see what they can get away with, training is a must to prevent an unruly, 100-pound puppy.

Take time to find what motivates your pyr and work together to develop your bond. A strong bond will greatly improve your pyr’s responses and create a strong partnership.

The coat of a Great Pyrenees is immensely beautiful and requires a lot of care to keep in top shape. Shedding occurs year-round with a blowing of their undercoat in the fall and spring. It is necessary to establish a weekly brushing routine, but 2-3 times per week is best.

A pyr’s coat is self-cleaning, so if they get muddy, simply let it dry and brush it out. Pyrs only need a few baths per year to keep their coat looking nice. Their double-coat is mostly mat resistant, but behind the ears and the pantaloons are subject to matting.

A pyr has a remarkable double-coat that keeps them warm in the winter, cool in the summer, and protects them from the elements.

Therefore, it is never advised to shave a Great Pyrenees. Shaving should only occur for medical purposes or in the case of neglect where the coat cannot be saved.

Great Pyrenees are also unique due to the double dew claws on their hind legs. These double dews are a part of the breed standard and akin to a thumb, so they should not be removed.

Unlike most dew claws, the double dews of a Great Pyrenees are attached by a bone and rarely are torn or problematic. The double dews should be trimmed regularly so they do not grow too long and into the dog’s pad, often causing a nasty infection.

(psst… you can check out all our favorite grooming tools here)

The Great Pyrenees is one of the healthiest giant breeds and in a safe home often live 10 to 13 years. I have heard of several pyrs making it to 15 years of age, which is pretty amazing for a giant breed.

Pyrs tend to have few health concerns, but osteosarcoma and bloat are the most deadly to the breed. Hip and spine issues are also fairly common, especially as they age. Allergies are often an issue for pyrs so extra attention should be paid toward their environment and nutrition.

The Great Pyrenees has a very slow metabolism and is a low-energy dog so they require a smaller than expected amount of food. A full-grown pyr may only eat 2-4 cups of high-quality food per day.

Free feeding is typically okay with this breed as well as they usually do a good job at regulating their weight.

should be slow and controlled to help avoid joint pain. A high-quality joint supplement and salmon oil are recommended to keep their skin, coat, and joints healthy.

Pyrs are not particularly active dogs and typically only need a brisk 30-60 minute walk each day (try our favorite harness to make walks easier). This should be accompanied with ample outside time as they usually prefer to be outside guarding.

Expect them to want to nap outside even in the winter cold. Their thick undercoat keeps them warm and protects them from the ice and snow. The Great Pyrenees is fairly inactive indoors, especially when properly exercised.

It is highly advised to avoid boarding your pyr in a conventional boarding facility. As livestock guardians, their senses are extremely sensitive and they are easily over-stimulated in kennels.

I have actually known several pyrs to go “kennel crazy” from too many noises and smells.

If possible, your pyr should accompany you on vacation as that will keep him with his flock and at ease. If that isn’t an option, hiring a loving pet sitter is the next best option. Ensure your pyr meets this individual several times before leaving to increase comfort.

A pyr’s devotion to his family is the most wonderful thing. They are incredibly loyal and would fend off a grizzly without thinking twice

bond between a person and her Great Pyrenees is insurmountable. If you learn to love their independent, guardian nature, you will share your home with an exceptionally loyal and devoted dog and you’ll never be without one again.

Pyrs are like potato chips – you can’t have just one!