For the past few months, we’ve been having two issues: upset tummy and itchy skin. Mauja has had really inconsistent stools – some loose and some firm. We haven’t been able to find an exact correlation to her diet, but my first instinct tells me that’s the issue. Atka’s tummy has been fine, but boy has he been itchy.

Atka has had itchy skin issues since he was about 10 months old. The first issue occurred around his eye. The area around his right eye became inflamed and the fur actually began to fall out. Thankfully, it never seemed to bother him. After Benadryl, several rounds of antibiotics, and a few types of ointments, it eventually went away. Unfortunately, after a few months it returned.

The second time we didn’t pursue any medication because we couldn’t say that one approach was actually effective. He wasn’t itching or rubbing his eye, so after a discussion with the vet, we decided to simply monitor it for a few weeks. Eventually, it went away again. This seems to happen every few months.

Currently, he’s not showing any symptoms with his eye, but his skin is quite itchy. We constantly see him scratching the back of his front legs and chewing on his back legs. Benadryl seems to help the symptoms, but it doesn’t get to the root cause of the issue.

We’ve been experimenting with different proteins and a variety of high-quality foods, but we haven’t found one that improves either of their issues. After awhile, I began to seriously contemplate feeding them home-cooked meals.

That thought terrified me.

What should they be eating? How much protein? How many fruits and vegetables? How would they get all of their essential vitamins and minerals? How do I determine their macro-nutrient needs?

So many questions and so few answers.

After dancing around the idea for a few weeks, I remembered a product we were able to try at BlogPaws last year. The fluffies had received a sample of Dr. Harvey’s Veg-To-Bowl and absolutely loved it. 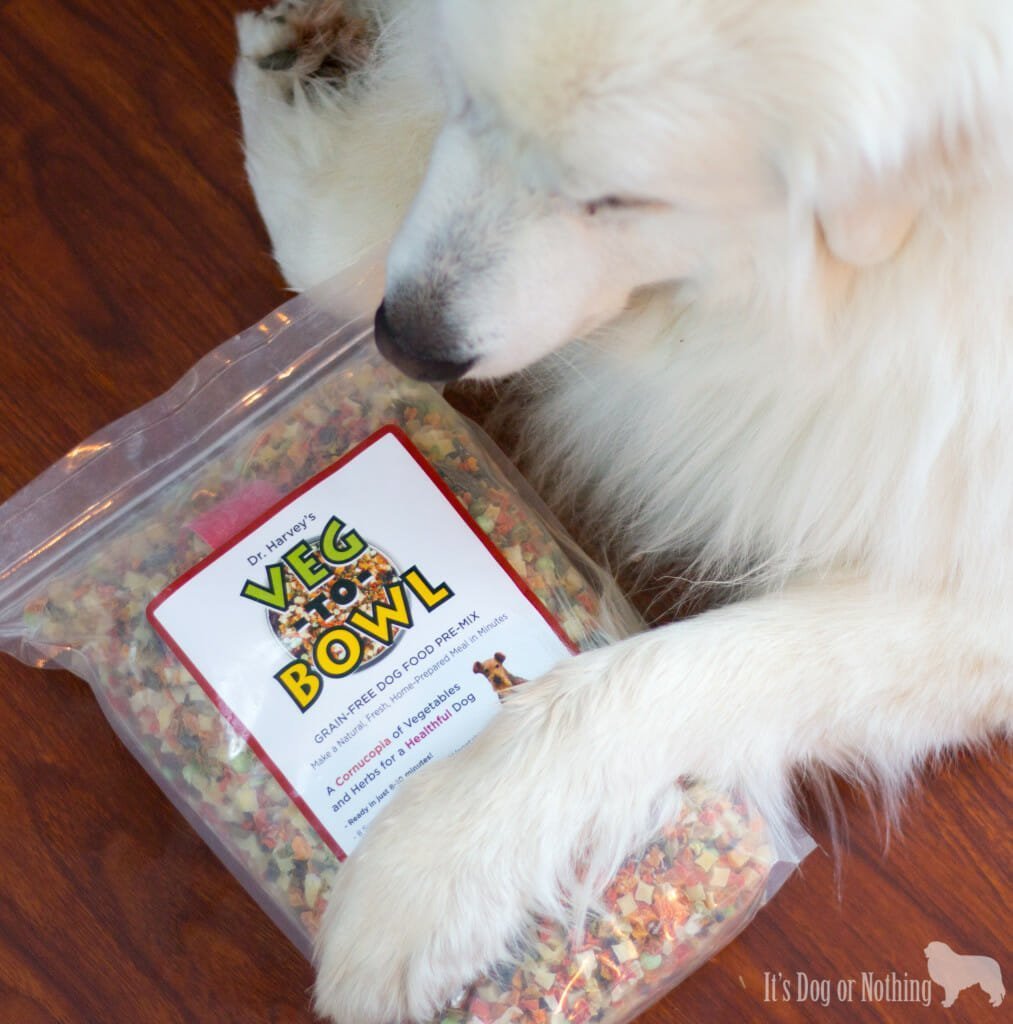 Veg-To-Bowl is a grain-free premix of nine different vegetables and herbs. You simply add your choice of protein and oil to create a complete, well-rounded meal. It makes feeding your dog homed-cooked meals extremely simple. At least, that’s the way it sounds.

I was still really nervous about making the switch to home-cooked meals, but thankfully, it was very easy to get my questions answered. After a phone call with Dr. Harvey himself, I felt much more at ease with my ability to adequately feed Mauja and Atka. I was really impressed that Dr. Harvey was so willing to take time out of his day to answer my long list of questions.

Last week, we slowly began to transition Mauja and Atka to the Veg-To-Bowl food so today begins the first day of their journey. I’m really hoping that switching them to a fresh-food diet will solve the issues we’ve been having. After reading so many of the testimonials, I’m pretty confident we will see success.

Each week, I’m going to write an update on their progress. Hopefully, these posts will assist any of you that have been considering making your dog his own meals. We also have a few other products from Dr. Harvey’s that we’ll be trying and telling you all about soon.

Stay tuned for more of Mauja and Atka’s journey to home-cooked meals!

Disclaimer: Dr. Harvey’s provided Veg-To-Bowl in order for It’s Dog or Nothing to try home-cooked meals. Don’t worry – an advertiser will never influence the content of this blog.