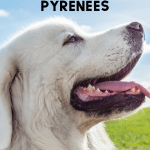 When we get Pyrenees in rescue, there are a few recurring reasons for surrender—all of which are breed traits.

As livestock guardian dogs, they don’t behave like most breeds. They bark, they dig, they roam, and they’re very independent.

I love Great Pyrenees—that’s no secret. But, I don’t promote them a dog for most people. To be honest, as much as I want all dogs to find a home, most people just won’t be happy with a pyr.

If you want a Great ees, consider these six things first.

When people are interested in a Great Pyrenees and ask me about my experiences, I always start by saying that they bark a lot.

This comment is usually followed by, “Oh, my *insert breed here* barks a lot too. At everything. So barking isn’t a big deal—we’re used to it.”

I can tell you that it’s unlikely that your dog barks as much as a pyr or other livestock guardian dog (LGD). Regardless of how much barking I try and prepare people for, they never believe me—until they add a pyr to their family.

Then I get the email: “Oh my gosh, I had no idea that dogs could bark that much!”

If you think you know , you can take Kiska for a day and let me know if you still think your current dog barks a lot.

Related: Will My Great Pyrenees Bark All the Time?

You don’t have a fence

There’s a reason most rescues require a 6 ft fence for Great Pyrenees.

You won’t have much luck with invisible fences either. Pyrs have an incredibly high pain tolerance and won’t think twice about the shock.

If you don’t have a fence and want a Great Pyrenees, you’ll need to be able to commit to leash walking and other safe ways to exercise your dog.

Regardless if you have a sturdy fence or not, I am a big fan of GPS collars to easily track down your floof!

You want an off-leash dog

If you dream of walking along the beach with your pyr trotting along beside you or going to a hike while your dog frolics through the woods, you probably shouldn’t get a Great Pyrenees.

The vast majority of Great Pyrenees cannot be off-leash.

The saying goes: an off-leash pyr is a disapyr.

Atka can be off-leash in certain situations, but it has to be a pretty low key environment. Mauja and Kiska can never be off-leash. There have been several times that I’ve seen their booties happily trotting off.

Everything goes back to this: Great Pyrenees are livestock guardian dogs.

They think their territory is as far as they can roam, and they’ll constantly test the limits. If you keep that in the front of your mind, you’ll never question your pyr’s behavior.

It’s like Mufasa said: “Everything the light touches is our kingdom.”

You want a trick dog

Pyrs are incredibly smart, but they aren’t usually interested in tricks and obedience. This doesn’t mean they can’t be trained—they just typically have better ideas.

“You want me to shake? Ehh… not really in the mood right now. Try again later.”

Shake, come, and down are trivial to them. They have more important things to focus on: protecting you and the rest of their flock.

This doesn’t mean that pyrs can’t be trained. They’re incredibly smart and need to be challenged. Just don’t expect it to be like training a Golden Retriever!

Or at least one without giant craters.

I wish I had pictures of our lawn before we moved in. It wasn’t perfect, but it was a nice-looking yard.

Fast forward two and our yard is missing most of its grass from the floofs’ constant digging. Especially the center of the yard, which is where they prefer to hang out.

We tried to fence it off to grow grass, but they would just climb over and lay on the seeds. We eventually gave up.

I can’t tell you how many times I’ve twisted my ankle or knee walking through the yard!

There are ways to minimize digging (like by building a digging box), but there’s always going to be a new place they want to dig. Mauja likes to try and remove the grass so she can lay on the cool dirt.

Grooming Great Pyrenees is out. They need to be brushed at least weekly, and it takes a bit of time to get through their fur.

If I want to do a full grooming session—bath, brush, ears, nails, teeth, and paw trimming—I need to set aside a day to get all three dogs done. Even then, I sometimes have to spread it out over a few days so I don’t completely wear out.

You’ll also need to be prepared to vacuum multiple times per if you want to keep a semi-clean house. And it’s not just because of the fur.

Everything sticks to their coats and is brought inside. Some days, we have more leaves and small twigs around the house than fur. I’m not sure which I’d prefer!

What are other reasons a Great Pyrenees might not be for someone?